The night everything changed, I felt like I was hosting a footy match in my uterus.

I didn’t get much sleep. I’d argued with my partner Michael, and thought I was just stressed and this was affecting my baby.  Morning finally arrived and off we went to watch my eldest son Mark play football. I didn’t feel well but assumed I was tired.

Angelo was my fifth baby, so I wasn’t too concerned. As the day went on, I felt more and more unwell. At home I went to bed to rest, I woke a few hours later, and it was bedtime for the kids. Amy, one of my daughters, asked if she could listen to the baby’s heartbeat with our home Doppler machine.

I waved the Doppler over my belly, trying to find the baby’s heartbeat. We only heard mine. I wasn’t too concerned, it was just a home machine, and I wasn’t a trained professional. I was fit, healthy, a non-smoker and had four beautiful children. Why wouldn’t there be a heartbeat?

BUT I had a niggling feeling. 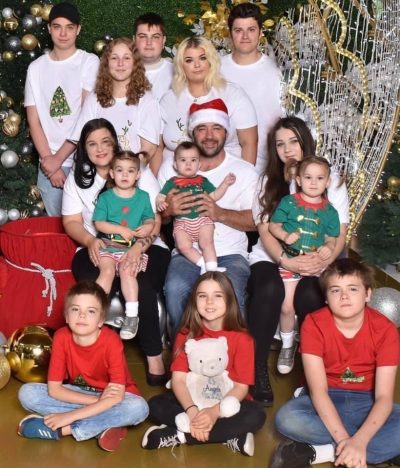 In the morning I decided to go to the hospital. When Michael asked if I wanted him to come, I said not to worry. It was nothing, I was being silly and needed to go otherwise I’d go crazy. So I took the kids to school and called the hospital.

Entering the ultrasound room, part of me knew. The midwife waved the wand over my belly, and I was looking at a still picture.

No little heartbeat flickering, no wriggling.

I was carrying my dead, unborn child. My beautiful child for who I had so many plans. My first with Michael.

After going through birth, watching Michael, cut the cord to our lifeless son shattered my heart. I physically felt pain. I had support in every corner of the room; Michael’s brother and sister and my best friend, but Michael was the only person I saw in those moments. As he held our son, I saw him break. As I clutched Angelo for the first time, I closed my eyes and prayed.

I opened my eyes, and that was it.

For the next 21 hours, I took in every single part of our precious Angelo. We had to explain to our seven children that, yes, he had been born and they did have a baby brother, but he had passed away. And no, we don’t know why. My heart broke a little bit more each time I watched one meet and say goodbye to Angelo.

I couldn’t let Angelo out of my sight. I wanted to soak up every second. Several times, nurses tried to tell me they needed to take Angelo to the morgue to cool him.

It got to the point I yelled at the staff and said they would not be taking my son anywhere.

I later found out about cuddle cots. There is nothing that would make the loss of Angelo better, but if the hospital had these, we would have been able to spend more time with Angelo and not had to have the nurses, who were just doing their job, interrupting. A cuddle cot is like a regular cot with a cooler in it, meaning babies can spend more time with their parents and don’t need to be taken to the morgue to be cooled down. Michael and I have run fundraisers and are so proud to have donated a cuddle cot to the hospital. It doesn’t make it better, but it helps.

We don’t know why we lost Angelo but what I want people to know is, it’s not just less kicks. If your baby’s movement is more active than usual, that can be a sign that the baby is in distress. It’s movement changes. If sharing my story helps one other parent not go through what we have gone through, then it’s worth it.