At about 36 weeks’ pregnancy, Josh and Holly gave birth to their firstborn son. To them, he was perfect in every way, but for lack of breath.

“I’d heard stories of people going through stillbirth, but you don’t ever really believe it could happen to you,” says Josh. 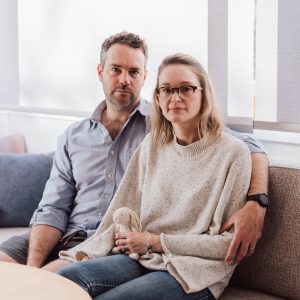 Around 2,200 families experience the tragedy of stillbirth each year in Australia. While not all stillbirths are preventable, there are ways to reduce the risk.

After facing this devastating loss, the Brisbane couple have been committed to raising public awareness about stillbirth. By sharing their story and making The Stillbirth Promise, they hope to inspire the public to join a movement that has the potential to save an unborn life. They also hope that encouraging the conversation about stillbirth will help others who have experienced it, to feel heard, and less alone.

“We’re encouraging Australians to make The Stillbirth Promise in the hope of sparing other families from the devastating loss of losing a baby”, says Holly. “Understanding more about stillbirth could save a baby’s life.”

Holly and Josh are calling on Australians to make a commitment to spreading critical awareness of the three key actions to reduce the risk of stillbirth with their networks and communities, and encouraging others to do the same.

“Our pregnancy was, for the most part, such a special and happy time. Bluey was the nickname given to him when we were about seven weeks pregnant (the size of a blueberry at the time).

“The nickname stuck throughout the pregnancy, and our family had all come to know and love him as Bluey. When he was born, we couldn’t bear to give him a new name,” shares Holly.

On a Monday morning in January 2018, Holly sat up in bed searching for movements, but there were none. Concerned something might be wrong, Holly contacted the pregnancy assessment unit at her hospital and was advised to go into hospital, where it was ultimately confirmed that Bluey’s heart had stopped beating.

“We were in disbelief. I just hoped that it was all a mistake, that they’d got it wrong somehow and our baby boy was going to be fine. But when he was born, the deafening silence in the delivery room, where there should have been newborn baby cries, confirmed our worst fears,” says Holly.

The couple reflect on feeling the same joy a parent would experience following the birth of a healthy child, after Holly delivered Bluey.

“Despite being far from the way we had expected, we still felt sheer pride and so much love when we met Bluey for the first time.

“The short time I spent with Bluey made me realise that happiness and sadness can coexist,” says Holly. “Life after Bluey can be described as bittersweet. He taught us the true meaning of unconditional love, but we will never really know him.”

Stillbirth does not discriminate. It’s a universal issue; it can happen to anyone.

“I feel a sense of injustice that Bluey doesn’t get to live his life and that he doesn’t get to know the love we have for him, but we keep his memory alive in many ways.

“We believe our second child, Olive, is a gift from Bluey. We tell her all about her big brother and say goodnight to him before bed every night,” Holly continues.

“The Stillbirth Promise is for Bluey, for Olive, for our loved ones who would like to have children, and for all Australians who may not know that stillbirth can touch their life,” adds Josh.

By making The Stillbirth Promise, Holly and Josh hope that the three key actions to reduce the risk of stillbirth will become common knowledge to expectant parents and the support networks around them. Expectant mothers are encouraged to:

“It’s bigger than just us. Six babies are stillborn every day in Australia – a rate that we had no idea about before losing Bluey,” says Holly. “With every sharing of the actions to reduce the risk of stillbirth, we can hope to achieve a future where fewer lives are lost.”