As a 22-year-old mum-to-be I didn’t even know the meaning of ‘stillborn’.

Don’t get me wrong – I knew that sometimes there were complications during pregnancy but I never knew there was a word used to explain this. I had never heard of a stillbirth and never in my wildest nightmares would have thought that I would become part of the statistics who experience stillbirth.

On that very special day in November 2010 I received a call from the gynaecologist to confirm my pregnancy. My first thoughts were filled with excitement. I still remember sitting on my bed in the front room of our house and the excitement that filled my entire body of what I thought the next months would bring. So blissfully unaware of what hurdles pregnancy could create and the challenges that lay ahead. 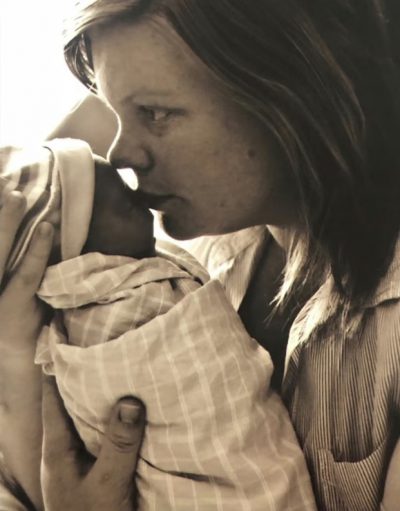 Soon I was through the first trimester and as far as I was concerned everything was going to be smooth sailing from here on in. Our home in my hometown in regional Victoria would soon be filled with the sounds of love of our newborn child and the smells of dirty nappies. How perfect life would be!

As a very excited mum-to-be I quickly started filling the wardrobes with beautiful clothes and preparing for our little boy to enter the world. Family members were also very excited and also began adding to the beautiful nursery that we had created and soon the wardrobe doors were struggling to shut. This new journey was really about to begin.

I had a relatively smooth pregnancy with a few hiccups along the way, but nothing to be alarmed about as the specialist assured me. All my ultrasounds were normal and the excitement grew as soon I would be birthing a healthy baby boy.

As we led into the first weekend of July 2011 all the excitement was to change.

We had a very busy weekend planned celebrating the 30th birthday of a close family friend. We were looking forward to the celebrations which would last all weekend long. I remember being out for dinner on the Saturday night, after being at the local football, and resting my hands on my tummy. I thought to myself “gee I haven’t felt much movement today.”

I gently nudged myself and I thought not to be silly. Everything would be fine. I had been at the doctors two days before and everything was normal. Within two weeks we would soon be holding our little boy. Little did I actually realise that it would be a lot sooner.

After a long weekend celebrating with family and friends, I began getting ready for bed on July 3, 2011. I was feeling a little uncomfortable and also noticed I had some unusual discharge.

Concerned, I had a look through some paperwork that had been given to me and assured myself that maybe I was just in the early stages of labour.

I said to David I think I am in labour, I am going to head to bed and see how I wake in the morning.

I woke in the early hours of the morning and I had continued to pass more unusual discharge during the night. I became very distressed. I called the midwife and discussed my concerns and said I can’t actually remember when I last felt my baby move.

The midwife was very reassuring and insisted that I come straight to the hospital. I walked into the local hospital and remember the look of excitement on the face of the local nurses, many who I knew, as they too looked forward to the birth of our son.

The next few minutes rushed before my eyes. I laid down on the bed in the maternity ward and the midwife placed the CTG monitor on. The room became deathly silently as she struggled to find a heartbeat.

I remember the comforting words she spoke to me and the love that streamed through her expression as she spoke to me. She explained that the doctor would be coming in to perform an ultrasound to get a better look at our baby. Shortly after the doctor arrived it was confirmed our beautiful little boy’s heart had stopped beating.

Although he was absolutely perfect at 38 weeks 5 days gestation, his heart was no longer beating and I would now begin the process of birthing my stillborn son. As the nurses and doctors gathered around, all with compassion and support for my family, I remember the horrible shriek that came from my mouth: “Can you just leave me alone, I just want to go back home with my baby, leave me alone.”

I felt so alone and so afraid I didn’t understand at all what was being said. It was all so overwhelming.

Within a few hours I was being placed in an ambulance and transferred through to Geelong Hospital as the doctors were concerned for my health. They thought it would be best to deliver in Geelong where the hospital was better equipped if an emergency was to arise.

Harry John Treweek was born weighing a tiny 2710 grams (yet biggest of my three babies) and was 49 cm long. I remember lying on the bed with my beautiful little baby laying on my chest. I remember that feeling of excitement as we both stared at him in amazement. I admired his huge feet and we laughed together as David was so excited that he didn’t inherit my red hair.

Such proud parents yet so totally heartbroken knowing that our moments with our son were limited. I remember those moments so very vividly – the touch of his hand and the special moment of holding him gazing into his eyes our foreheads together and kissing his beautiful button nose. Moments that will stay with me for the rest of my life.

Heading home from the hospital, the realisation set in that the long-awaited first milestones such as the first smile, when baby first rolls or first crawls had all changed.

Instead I was faced with milestones such as when would my baby return home after the autopsy report, where would my baby’s final resting place be, and what arrangements needed to be made for my baby’s funeral, and many others. Choices, milestones and decisions that all had to be made but something I could have never imagined doing for my own son.

The first time I turned on the television after the birth of Harry to watch the news I sat on the couch crying and as the tears ran down my face, I thought to myself the world really does not stop for anyone. The realisation that the world was still continuing on even though my entire world felt as though it had crumbled into millions of pieces felt so cutting.

It was so hard for me to see that the smile would ever return to my face but the unconditional support of my local community and beyond was amazing. I feel totally grateful the support that was given to me and my family through this time and ongoing. Strangers that stopped me in the street that had heard my story and wanted to pass on their love, all the flowers that flowed from my front door through the lounge room and kitchen and right to the backdoor, the support of my management and colleagues at my workplace and most of all the unconditional love from friends and family.

There was always someone there that was willing to pull their runners on with me and go for a walk, share a cup of coffee with me or even to share a smile with me as I walked down the street, though I still felt so alone isolated and just wanted to hide away. Through the years I began to open up and it soon taught me to be kind to myself and reach out when I could. People just want to help.

I tortured myself and my body for many years for not being able to safely delivery my son into this world. And finally, after nearly 10 long painful uncomfortable years I have taught myself to embrace those feelings and be grateful for the fact that I have since had two healthy children who are lucky enough to have a very special brother in Harry.

I am now a single mum of three children. Two who I am grateful to be able to spend every day watching and growing in front of my eyes and one who is always in my heart. I feel he continues to guide me through life and ensure that I believe in myself. It has taken a lot of time but every day he continues to help complete me and I feel very grateful to have been touched by an angel than to have not experienced life with Harry at all.