Our first baby Millan was stillborn 10 years ago. One of the things I was most afraid of was forgetting, but instead it feels like it was yesterday.

In 2010 I was expecting my first child, it was a dream run pregnancy and everything was going well. Then on a normal Saturday, when I was 38.5 weeks pregnant, I realised I couldn’t recall if I had felt movement that day.

It had been a busy day with family and friends dropping by. Then Mark and I had a nice dinner and I had some peppermint fudge – but I couldn’t feel movement. 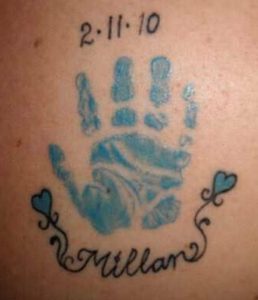 We went to hospital where a midwife was feeling all over my stomach but she couldn’t find a heartbeat. She quickly got the doctor and an ultrasound machine.

As the doctor searched, he couldn’t look at me. I remember his head bowed down as he said, “I am sorry”.

It was late on a Saturday evening and they couldn’t do anything till the morning so we decided to go home. That night I didn’t sleep.

I just sat on the couch with my big Labrador Bonnie. Her head was buried into my lap and she didn’t move from my side all night. It was like she knew and felt our pain.

I just kept replaying my last moments and thinking ‘what did I do wrong’. Was it the Thai green chicken curry from the Friday night? Did I move or do something out of the ordinary?

On Sunday morning my husband Mark and I made our way back to the hospital. During the ultrasound they couldn’t see anything out of the ordinary, Millan was fully engaged getting ready, doing everything like the book – remember I said it was a dream run pregnancy.

The induction process was long. I had Millan at 3:30am on Tuesday the 2nd of November 2010. He weighed 2.8kg, was 51cm long and he was perfect in every way. We stayed in hospital for six hours just spending time with him, bathing, holding, cuddling and getting ready for the final goodbye.

Watching them wheel him out was the hardest thing I have ever had to do.

It’s hard being a bereaved mum. I blamed myself a lot. I kept questioning why it had happened and going over the what ifs. My body, a women’s body, is meant to be able to carry and give birth – it felt as if my body failed. My body carried Millan safely for 38.5 weeks, and then it didn’t.

Being pregnant again took all my mental strength. I was in constant fear of having a child die again. Mark and I now have three beautiful girls. Every year we do something as a family for Millan’s anniversary. We do something that he would have wanted to do on his birthday, whether that be going to the zoo, a park or the pool. We also try and make time for Mark and me to remember Millan together.

In the early days my greatest fear was worrying if I was going to forget what it felt like, forget the way Millan smelled, the way he made me feel as a mother and just the rawness of it all. Each year you are further away from that last cuddle, that last touch.

But the realness hasn’t faded and some days it still feels like yesterday. I can still picture him, still feel the same way about being his mum.

It’s hard to describe to other people the realness of loving a child, or being a mum to a child that isn’t physically here. Millan is my son and always will be. He is in my thoughts every day in some form, just like my three living children are.

It’s crazy that six babies are stillborn each day in Australia. That’s six families saying hello and goodbye in a single day and there doesn’t seem to be enough awareness around, it feels like it is taboo to talk about children dying.

But if you know someone that has lost a child don’t be scared to acknowledge it. If you don’t know what to say that’s totally ok, just be there and sit silently and listen.