My husband Trent and I have three beautiful children. Our first daughter is Nina Alise Royan, who was stillborn at full term on 13 April 2015. Our second daughter Bonnie was born in March 2017 and she is now almost four years old. Our son Leo was born in June 2020.

My long awaited pregnancy with Nina had gone smoothly and Trent and I were excitedly awaiting the arrival of our first child. 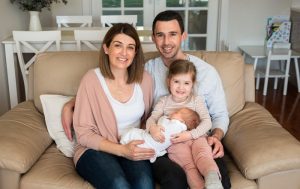 I was 39+1 weeks pregnant when I woke and became concerned when I had not felt my normally active baby move. After only a couple of hours, we headed up to the hospital.

Although we had anxiously gone to be checked out, we never expected the devastating news that was about to come – news from the midwife and obstetrician that they were unable to find Nina’s heartbeat. She had sadly passed away.

We were in complete shock.

The news was overwhelming, and hard to sink in. We could not believe that this could happen to us and that we made it all the way to full term only to lose our daughter.

The realisation then sunk in that not only would I be delivering my daughter stillborn the following day, that I would be delivering her on my birthday. A cruel twist of fate that in time has proven to create a very special connection between Nina and I – that we will forever share our birthdays.

Nina was born at Newcastle Private Hospital, and in such an awful situation we were comforted by how supportive the staff were. They organised for moulds to be made of Nina’s hands and feet so that we would have a lasting memory of our daughter.

Taking the moulds is something we would have never thought of doing, and will be eternally grateful for the hospital staff for recommending it. We now have the most beautiful and life like moulds that we will treasure forever.

Trent and I will never completely understand how our daughter Nina passed away at full term. It is believed it was a possible cord injury but we will never have a definite answer.

It is shocking to realise just how common stillbirth is and that over many decades the stillbirth rate remains unchanged, even as we head into 2021.

We feel passionate that this has to change and we are grateful that Red Nose is funding research to better understand and reduce future stillbirths so that other families do not have to go through the heartbreak of losing a child.